On January 1st, 2008, the Grand Chapter of The Equestrian, Secular and Chapterial Order of Saint Joachim re-established The United Kingdom Commandery to recognise the historical importance of the United Kingdom to the Order, and to better serve its growing membership there.

The Commander of The United Kingdom Commandery “Edward the Confessor” is H.E. The Chevalier Trevor Anthony Haynes GCJ, FCILT. Born at King’s College Hospital in south London, England, H.E. the Chevalier Haynes was raised in Camberwell and educated at St. Joseph’s Academy Grammar school in Blackheath, gaining qualifications in Biology, English Language, French, Mathematics and Physics. He was employed by London Transport for more than 36 years in various departments, as well as managerial roles in the Crossrail organisation. He assisted with the opening of the Jubilee line by The Prince of Wales in 1979 and the opening the London Transport Museum by Princess Anne at Covent Garden in 1980. Between 2010 and 2014 he worked with the Transport Benevolent Fund, an organisation that assists people in the public transport industry who need financial or other help.

Now in retirement, H.E. The Chevalier Haynes continues working in the voluntary sector. This chiefly includes chairing the trustees of Great Oakley Village Institute, which runs the village hall close to his domicile, assisting in the work of the Worshipful Company of Carmen, of which he is a Liveryman, and past Treasurer for London’s Transport Choir. He is a Freeman of the City of London and Fellow  of the Chartered Institute of Transport & Logistics. He is also a Juror of The Guildable Manor of Southwark – a charitable organisation promoting good fellowship and maintaining traditions of the Town and Borough of Southwark. He is a member of the Art Fund, National Trust, English Heritage, 20th Century Society, Northants Industrial Archaeology Group, London Omnibus Traction Society, Branch Line Society, Campaign to Protect Rural England, Cinema Theatre Association, Cinema Organ Society, Jewish Museum,  and the Society for the Preservation of Beers from the Wood. He is also a Friend of the Historical Houses Association and a Friend of the London Transport Museum. He is a member of the Liberal Jewish Synagogue in London.

The Order of Saint Joachim was well established in the UK, with its first members at the end of the 18th Century. In addition to Admiral Horatio Nelson and the Order’s Grand Vice Chancellor Sir Levett Hanson, other prominent English members included Robert Ker Porter (1777–1842), historical painter to Tsar Alexander I of Russia and served as British consul in Venezuela, known for his accounts of his travels in Russia, Spain, and Persia. Likewise his sister, Jane Porter, a famous writer, also became a member of the Order of Saint Joachim and for some reason thereafter adopted a nun’s habit and styled herself a “lady Canoness of the Order”. Other early English members included Viscount Trafalgar, son of William, Earl Nelson, and Philippe D’Auvergne, Prince de Boullion, Rear Admiral of the Blue. Philippe d’Auvergne cut a dashing figure in the time of the French Revolution as a spymaster and organiser of Royalist resistance in France from his base in the Island of Jersey, where he was Governor. British LtCol Charles Imhoff (later General) was also granted the King’s Warrant in 1807 to wear the insignia of the Order of Saint Joachim.

In the 1980s and 1990s The Order of Saint Joachim had its administrative offices in England, where the late Grand Chancellor, HE The Chevalier Leslie Rosan GCJ, Lord of Haverhill, resided. During this period, there were a number of small “Commanderies” scattered across the UK, operating locally. In 2005 these small commanderies were consolidated into a single national Commandery. The first Commander of The United Kingdom Commandery “Edward the Confessor” was the late H.E. Dr Commander (RN) The Chevalier Bryan R. Olive GCJ. In 2013 H.E. The Chevalier Simon Peter McIlwaine GCJ succeeded Commander  Olive as Commander following Chevalier Olive’s death. He was succeeded in 2016 by the current Commander, H.E. The Chevalier Trevor Anthony Haynes GCJ. 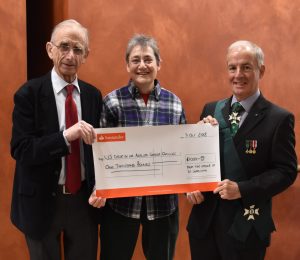 The UK Commandery supports a number of local charitable causes, including the Medway ‘Emmaus’ community which supports disadvantaged people, and the Newham Cornwell VC sea cadet unit which traditionally provides an honour guard at UK investitures. Other donations have included the Mirfield Rifle Volunteers and the Wigan Borough Armed Forces Community HQ. Past donations have also included support for The Liberal Jewish Synagogue for its Asylum- Seekers Drop-In program, to L’Arche, a charity which offers homes, programmes and support networks for people with developmental disabilities and Hannah’s Holiday Homes which provides recreational get-aways for children with serious and terminal illnesses.

The UK Commandery has also made donations to both the Portsmouth Garrison Church restoration fund, an historic venue where we have held past investitures, and the HMS Victory Restoration Fund.

Existing and prospective members of the Order in the United Kingdom are encouraged to contact either the Commander or Treasurer Chevalier Christopher Godbold KCJ regarding events such as annual investitures.